Kadenang Ginto is the story of Romina Andrada, a secretary turned wife of business tycoon Robert Mondragon, who married her despite the fact that she was raped and was carrying the child of the assailant. Unknown to Romina, it was Daniela, Robert's daughter, who had orchestrated her abduction, right before seducing Romina's fiance, Carlos Bartolome. With their lives intertwined, their daughters, Cassandra and Margaret, are made to fight as to who the rightful heiress to Robert's empire.

Nasa Puso was used as an official soundtrack for Kadenang Ginto . In which its Lyric Video gained popularity.

According to Wikipedia, it is said that Kadenang Ginto would possibly air until 2020 due to positive ratings.

Carlos
Add a photo to this gallery 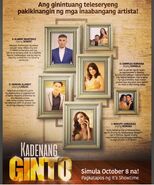 Poster 2
Add a photo to this gallery
Retrieved from "https://kadenang-ginto.fandom.com/wiki/Kadenang_Ginto?oldid=936"
Community content is available under CC-BY-SA unless otherwise noted.