Origin of the Meme

The meme originated at the Season 3 trailer. In which Daniela can be seen holding a red luggage and a purse. Since then, fans photoshopped her pose and placed her in various locations.

Even her meme is now a toy.

Daniela, did Romina take your car? 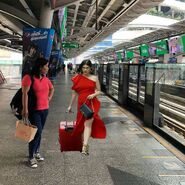 "What are you looking at?"

She`s reporting to Raffy Tulfo on the radio about Romina. 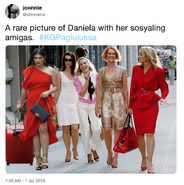 Is this why you ignored your daughter?

When Daniela was included on AirAsia ad

Daniela promoting the product of Proctor and Gamble, Downy 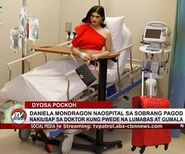 Daniela was hospitalized after being exhausted on her travels (Credits: Dyosa Pockoh)

Daniela on her new movie 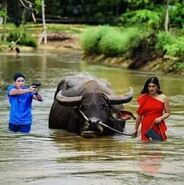 Daniela was caught by Cardo Dalisay 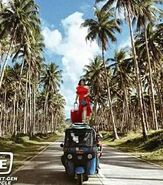 Daniela on the tuktok's (tricycle that commonly found on India,Thailand and the Philippines) top

Daniela is ready for skates

In The Gold Squad`s video ("Daniela Mondragon Luggage Raid"), there were various items that were actually inside the red luggage.

Impact on the Philippines' tourism sector

In an interview of Beauty Gonzales, Dimples Romana, and Richard Yap on Bandila, Dimples stated that she see different places of the Philippines because of the meme. Beauty later told her that she might be called by Department of Tourism, in which Beauty and Dimples are saying hi to "Berna".

Retrieved from "https://kadenang-ginto.fandom.com/wiki/Travelling_Daniela?oldid=645"
Community content is available under CC-BY-SA unless otherwise noted.